Super simple outdoor tv cabinet made for 50" TV out of pressure treated lumber and some barn style hardware. 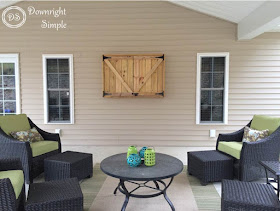 We used two 2x8x8 pressure treated lumber and cut 40" off each board to be used as the sides. The remaining length of each board was about 56" (slightly less due to blade width from initial cut off of each board. We placed the 56" boards between the side boards for an overall width outside to outside of approximately 59".

We used a 2x4x10 and cut two lengths slightly less than 56" to be at the top and bottom of the inside dimensions which were lag bolted into the wall.  The box frame was then attached to the cleats using decking screws and L brackets.

We used regular pressure treated decking for the doors (approx 6" wide) . We used five - 8 foot boards for the vertical doors and cut 10 verticals at 36 1/2" each.  We ripped the remaining two decking boards at 3" on the table saw for each "Z".  Each door is 27 1/2" wide when finished.

From each 3" ripped board, we cut two lengths of 27 1/2" and had enough left over from each board for the diagonals which we cut and fit in place last.  We placed two of the 27 1/2" cut boards on the ground and started attaching the verticals from what would be the inside of the door.  We made sure everything was squared up and the spacing of the five verticals was even across the top and bottom of the "Z".  Last we cut and fit the diagonals in place and attached them to the inside.  We made the second door following these same steps.

We purchased a fairly cheap TV because it's outside and also didn't want to spend a ton in case it was ever stolen.  Depending on how deep your TV is, or the wall mounting brackets you purchase, you may need to use 2x10x8 boards for the box frame. 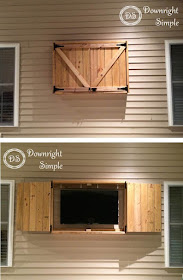 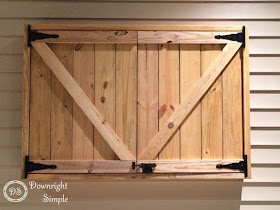 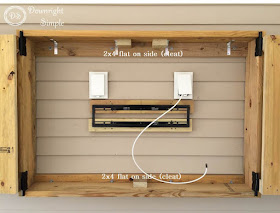 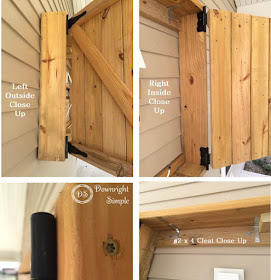 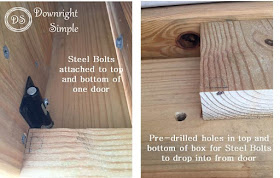